Be the first to write a review
Tweet
14%
OFF RRP  $74.99 $64.75
This item qualifies for FREE delivery
This title examines in a comprehensive way the critically formative period when a culturally coherent geopolitical region identifiable as East Asia first took shape. By sifting through an array of both primary material and modern interpretations, Charles Holcombe unravels what ""East Asia"" means, and why. He brings to bear archaeological, textual, and linguistic evidence to elucidate how the region developed through mutual stimulation and consolidation from its highly plural origins into what we now think of as the nation-states of China, Japan, Korea, and Vietnam. Beginning with the Qin dynasty conquest of 221 BC which brought large portions of what are now Korea and Vietnam within China's frontiers, the book goes on to examine the period of intense interaction that followed with the many scattered local tribal cultures then under China's imperial sway as well as across its borders. Even the distant Japanese islands could not escape being profoundly transformed by developments on the mainland. Eventually, under the looming shadow of the Chinese empire, independent native states and civilizations matured for the first time in both Japan and Korea, and one frontier region, later known as Vietnam, moved toward independence.

Be the first to review The Genesis of East Asia. 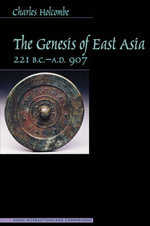