The Girl who became a Goddess 1

Folktales from Singapore, Malaysia and China

by Amanda Spedding and Isabella Latorre

The Girl Who Became a Goddess is more than just a book of fables, it is a tribute to the childhood stories of someone who has experienced multiple cultures and learned to love them all.

These are tales passed on from generation to generation, some to delight, some to terrify, all to enlighten. As a girl, a mother, and a teacher, Theresa Fuller retells her favorite folk stories through the lens of her own life experiences in Singapore, Malaysia and Australia, putting a unique spin on ageless classics.

A beautiful princess learns that words have power.

A young boy is willing to sacrifice everything for his family.

A woman must decide between the man she loves and the human race.

The Girl Who Became a Goddess is more than a collection of stories, it is a glimpse into childhood memories and a love letter to a young girl from the adult she has become. 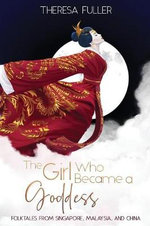 The Girl who became a Goddess

by Amanda Spedding and Isabella Latorre

General fiction (Children's / Teenage) Short stories
Hold on while we process your request.