by Monique Snyman and Ben Baldwin

When a scientist in Wales, who yearns to see the supernatural world, performs an experiment on a woman in his care, not only is her mind destroyed but it sets into motion a series of mysterious events in the future.

Years later, a beautiful, albeit sinister woman arrive on the London social scene and soon thereafter influential men start committing suicide for no apparent reason. Their deaths are horrific, often seems unrelated, but it quickly becomes clear that there are forces not of this world behind their demise.

The Great God Pan was widely criticised at the time of its release, but has since gained widespread adoration, influencing horror writers like Bram Stoker, H.P. Lovecraft, and Stephen King.

With an introduction by William Meikle and interior artwork by Luke Spooner.

Proudly represented by Crystal Lake Publishing-Tales from The Darkest Depths.

Be the first to review The Great God Pan. 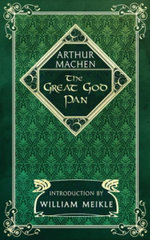 by Monique Snyman and Ben Baldwin