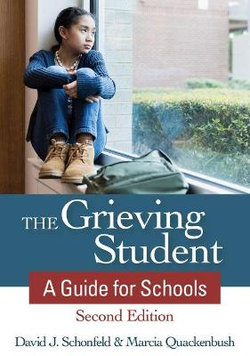 A Guide for Schools

Educators and other school professionals can be a critical lifeline for grieving children. With the second edition of this bestselling book, school staff will have the practical guidance they need to provide sensitive support to students of all ages and their families.

Author David Schonfeld-a renowned expert on childhood bereavement and school crisis-partners with family therapist Marcia Quackenbush to guide school teams through a child's experience of grief and illuminate the most powerful ways to make a positive difference. Drawing on both empirical research and extensive professional experience, the authors have enhanced this edition with up-to-date information on grief in the context of school crisis and trauma, suicide loss, social media, and other timely topics. School staff will get real-world tips, strategies, vignettes, and activities to help them skillfully support students as they cope with grief and work their way back to full participation in academic and social life.

Marcia Quackenbush, M.S., MFT, CHES, Senior Editor and Health Education Specialist, ETR Associates, Scotts Valley, California, is a licensed family therapist and certified health education specialist. She has more than 15 years of clinical mental health experience, much of which is focused on children, adolescents, and families of people living with life-changing condition; or people coping with terminal illness in themselves or family members. Ms. Quackenbush has written extensively in the health education field, publishing numerous articles and books on a range of topics.

David J. Schonfeld, M.D., Director, National Center for School Crisis and Bereavement (NCSCB) and Director, Division of Developmental and Behavioral Pediatrics, Cincinnati Children's Hospital Medical Center, has provided consultation, technical assistance, and training in the areas of pediatric bereavement and school crisis preparedness and response for more than 20 years. He has provided presentations at national and international meetings and worked with communities throughout the United States and abroad (including Europe, Great Britain, Asia, the Middle East, Scandinavia, Latin America, and Africa).

In 1991, Dr. Schonfeld established the School Crisis Response Program at Yale University School of Medicine, where he provided training to tens of thousands of school-based personnel throughout the country and technical assistance in hundreds of school crisis events. Dr. Schonfeld has consulted with schools during the aftermath of numerous school (including school shootings and other school violence) and national crisis events. From 2001 to 2004, he consulted to the New York City Department of Education and coordinated training for school crisis teams in the wake of the September 11, 2001, terrorist attacks and provided training to more than 1,000 district- and school-level crisis teams within the system.

In 2005, Dr. Schonfeld was awarded funding by the September 11th Children's Fund and the National Philanthropic Trust to establish the NCSCB. Dr. Schonfeld has worked with schools coping with large-scale natural disasters, such as Hurricane Katrina in New Orleans in 2005; Hurricane Ike in Galveston, Texas, in 2008; and the 2008 earthquake in Sichuan, China.

Dr. Schonfeld is currently a member of the National Commission on Children and Disasters, the Disaster Mental Health Subcommittee of the National Biodefense Science Board, and the American Academy of Pediatrics' Disaster Preparedness Advisory Council. He is actively engaged in school-based research involving children's understanding of and adjustment to serious illness and death and school-based interventions to promote adjustment and risk prevention.

Be the first to review The Grieving Student.