Be the first to write a review
Tweet
RRP  $41.99 $40.90
BOOK ONE: Tallin "Jagger" Landon isn't a good man. In fact, he isn't a man at all but a bear shifter and the president of the Grizzly MC. When he takes in the wounded female of a rival MC, retaliation from that club is inevitable. But Jagger doesn't expect to be so territorial of a female that isn't even his. Sonya White is desperate for a way out, and will do just about anything for her freedom. Taken as a teenager by Trick, the Wolverine MC president, she has been the sexual plaything for the sadistic shifter for years. But the drama keeps unfolding with the dominant and possessive Jagger declaring Sonya is his, and a jealous club whore and Trick coming back to settle the score. Sonya can either run from the MC life or let Jagger claim her fully like he demands. BOOK TWO: Brick, a bear shifter and the Sergeant at Arms for the Grizzly MC, is a recluse and bastard by all accounts. With an ugly past, and a scar to match, he is content with using club whores to pass the time. But then he sees Darra, a stripper and the only female that makes his cold, dead heart beat again. Darra Strand has a past filled with emotional and physical pain, but she is stronger because of it. When someone threatens her, a savior comes in the form of an angry, scarred, and heavily muscled biker named Brick. But when the MC has to go on a run out of state to help another charter, Brick is forced to leave Darra behind. A club rival decides the time for retaliation toward the Grizzlies has come. But Darra is Brick's and anyone that hurts her is as good as dead.

Be the first to review The Grizzly MC. 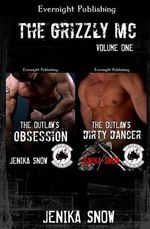 Fantasy romance Romance Horror & ghost stories
Hold on while we process your request.