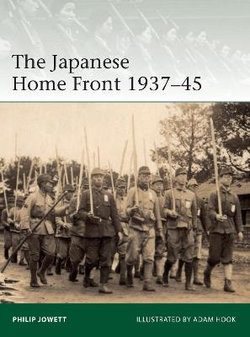 During World War II, Imperial Japan was the world's most militarized society, with a host of uniformed organizations supporting the war effort in East Asia and the Pacific and ultimately tasked with defending the home islands. Featuring full-color artwork, this book reveals the organization and appearance of the military and civil-defense forces that supported the Japanese war effort from 1937 to 1945.

From the beginning of the Second Sino-Japanese War in 1937 until the Japanese surrender in August 1945, a multitude of military and civil-defense forces strove to support the Japanese war effort and latterly prepared to defend the home islands against invasion. Indeed, Japan was the world's most militarized society during World War II. Fully illustrated, this study describes and illustrates the military and civil-defense organizations that conducted the Japanese war effort in the home islands throughout World War II.

By the time that Imperial Japan embarked on a full-scale invasion of China in 1937, the civilian population of Japan had lived through more than five decades of aggressive military expansion, including multiple wars against China and Russia and involvement in World War I. By 1937 Japan had a fully militarized society; military parades were part of everyday life for school children of both sexes, while women joined patriotic associations and learnt nursing skills in preparation for going to the front if necessary. Schoolboys and male students handled rifles and pushed wooden artillery and tanks around the playground for the propaganda newsmen.

The Japanese enthusiasm for military expansion was increased when the war was extended into South East Asia from 1941. Japan's astounding victories in 1941-42 saw the Empire spread to most of the British, Dutch, French, and US territories in the region. The constant setbacks for the Japanese from 1943 saw a "backs to the wall" attitude in Japan which only served to increase the number of volunteers coming forward. Heavy Allied bombing raids in 1944 and 1945 meant that thousands of firefighters, air-raid wardens, first aiders and other civil defenders were recruited. By 1945 nearly every Japanese male over the age of 10 wore Army-style uniform, while a majority of women and girls also wore some kind of military attire. The expected Allied invasion of Japan in 1946 also saw the recruitment of literally millions of Japanese who were to be armed with bamboo spears.

In this book, Philip Jowett reveals the many military and civil-defense organizations tasked with supporting Japan's war effort and defending the home islands. Specially commissioned artwork and carefully chosen archive photographs depict the appearance of the men, women and children involved in the Japanese Home Front as initial victories gave way to crushing defeat for Imperial Japan.

Philip Jowett has been writing military history since 1997. He has published many books on the armies of Asia in the first half of the twentieth century, and has made a special study of the armies of China. He has also published on the Russo-Japanese War, the Mexican revolution and the Italian and Japanese armies of the Second World War. His most recent books are China and Japan at War 1937-1945 and Chiang Kai-shek versus Mao Tse-tung: The Battle for China 1946-1949.

Adam Hook studied graphic design, and began his work as an illustrator in 1983. He specializes in detailed historical reconstructions, and has illustrated Osprey titles on subjects as diverse as the Aztecs, the Ancient Greeks, Roman battle tactics, several 19th-century American subjects, the modern Chinese Army, and a number of books in the Fortress series.

His work features in exhibitions and publications throughout the world. He lives in East Sussex, UK.

by Philip Jowett and Adam Hook