by Jeff Parker, Paul Tobin,  Brian Clevinger and others

This item qualifies for FREE delivery
When Ming the Merciless launched an all-out assault on planet Earth, the colorful band of heroes known as Kings Watch led the resistance, and triumphed! Now, across the cosmos and in the dark corners of our very planet, Earth's defenders continue the mission, separate and yet together in spirit!


Pursued across space, Flash Gordon and his friends Dale Arden and Dr. Zarkov must rally the oppressed people of Ming's dominion to the cause. But can one man -- even someone as fearless as Flash -- navigate the shifting allegiances of countless races to unite for the common cause?

Mandrake the Magician, the world famous illusionist, puts on a show you'll never forget, as he faces the all-new, all-deadly Cobra! Can he stop her from amassing Earth's most dangerous mystical artifacts in a bid for global domination?

On the distant planet Arboria, a ragtag team of misfits searches for a legendary figure known as Jungle Jim -- a hard-drinking, somewhat mad explorer with power over the forest itself -- to save a captive revolutionary from Ming's death sentence!

The Phantom is dead! Lothar, the world's strongest man, assumes the mask of The Ghost Who Walks until he can track down the true heir to the heroic legacy... but the sole survivor of the Walker bloodline is already neck-deep in danger!

Prince Valiant, a knight who would dare any adventure, gets his fondest wish... as Mandrake plucks him from the timestream and hurls him headlong into the fight against Ming alongside the strangest incarnation of Kings Watch ever assembled!

Brian Clevinger is writer best known for the webcomic 8-Bit Theater as well as the Eisner nominated Atomic Robo.

Darwyn Cooke was an Eisner Award-winning cartoonist and animator. After spending several years as a magazine art director and graphic designer, Cooke switched careers and began working in animation, where he contributed to such shows as Batman: The Animated Series, Superman: The Animated Series and Men In Black: The Series. From there, DC Comics approached Cooke to write and illustrate a project that the artist had submitted to the company years earlier - Batman: Ego. The critical success of the title led to more freelance work, including the relaunch of the Catwoman series with writer Ed Brubaker (which inspired Cooke to write and draw the graphic novel Catwoman: Selina's Big Score). Cooke then spent several years writing and drawing the ambitious epic The New Frontier, a six-issue miniseries bridging the gap between the end of the Golden Age of comics and the beginnings of the Silver Age.

Roger Langridge has been producing comics for over twenty years.

Most recently, he has attracted critical attention for his work on the Harvey Award-winning The Muppet Show Comic Book (BOOM! Studios) and Thor: The Mighty Avenger (Marvel Comics); other works of note include Marvel's Fin Fang Four, Fantagraphics' Zoot! and ART D'ecco (in collaboration with his brother Andrew), and the NCS, Ignatz, Eisner and Harvey Award-nominated comic book Fred The Clown.

He currently lives in London with his wife Sylvie and their two children.

Be the first to review The King Collection. 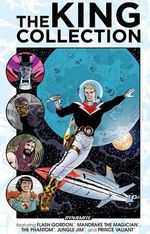 by Jeff Parker, Paul Tobin,  Brian Clevinger and others