The Legend of the Wizard's Apprentice

KERWYN THE APPRENTICE: BOOK 1 OF THE 5-BOOK SERIES, "THE LEGEND OF THE WIZARD'S APPRENTICE" Kerwyn is the seventeen-year-old, and somewhat inexperienced, apprentice to the Master Wizard Sernett. Kerwyn was abandoned on Master Sernett's front doorstep when he was just a baby. Master Sernett took Kerwyn into his home, raised and trained him in the ways of magic, and has since come to think of Kerwyn as his own son. Kerwyn's eyes are strange and troubled. One is as black as the darkest night and the other is so blue that it seems to glow with its own inner light. The lad's eyes are indicative of both his personality (fierce, yet gentle as a lamb) and, perhaps, his ultimate destiny: to fight for good and defeat the Evil Master. Master Sernett is at a loss. He doesn't know what to do with Kerwyn, who has a real natural talent for performing magic, but his young apprentice has no focus. The master senses the greatest amount of the One Power in his apprentice that he has ever sensed in anyone. It is often so powerful, as a matter of fact, that the master wonders if the legends are true. The legends say that one day, the greatest wizard will return to battle the Evil Master. With this epic event, the world will finally be free of the Dark Tower and the evil creatures that live inside. Alas, however, Master Sernett--looking upon his young apprentice in both sheer amazement and bewilderment--believes that if this boy, who commits more magical fumbles than touchdowns, is indeed the legendary great wizard reborn, then this world is finished, and evil will most certainly be victorious. But don't count Kerwyn out yet Over time, he has problems with his magic and makes mistakes, but he is also able to cast the most wondrous and miraculous of spells--much to both his and Master Sernett's surprise--usually in defense of someone or something he cares about. In fact, Master Sernett is not alone in his belief that Kerwyn is the legendary great wizard having come back. If you like fantasy stories, or stories of the underdog prevailing over the sure thing, then you'll love Kerwyn the Apprentice. Kerwyn occasionally stumbles and falls, but he continually gets up, dusts himself off, and tries again. At one point, he is doing so well that he even has two females--both of whom he cares for very much, but in different ways--vying for his affections. Kerwyn's and Master Sernett's friends, comrades, and enemies include dragons, elves, ogres, magical royalty including queens and princesses, Mother Nature, and the peoples, animals, and other creatures of the forest. They don't always fight on the same side of the battle, with some betraying Kerwyn and Master Sernett, and some remaining ever faithful to the cause of good. Kerwyn the Apprentice is the first book in the five-book series, "The Legend of the Wizard's Apprentice," so the adventure and fun are only just beginning. Come on the magical roller coaster adventure of a lifetime with Kerwyn and Master Sernett. Bon voyage

Be the first to review The Legend of the Wizard's Apprentice. 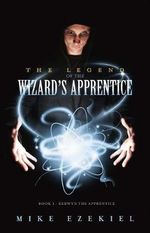 The Legend of the Wizard's Apprentice