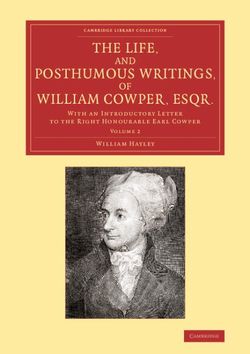 The Life, and Posthumous Writings, of William Cowper, Esqr.: Volume 2

With an Introductory Letter to the Right Honourable Earl Cowper

Successors such as Wordsworth and Coleridge admired yet overshadowed William Cowper (1731-1800). Troubled by mental instability, he retreated from both the legal profession and the woman he had hoped to marry, seeking out a quiet existence in the country. In spite of his struggles, he made a translation of Homer's Iliad, produced a considerable body of poetry, and maintained many epistolary contacts. This four-volume biography, compiled by his friend and fellow poet William Hayley (1745-1820), appeared between 1803 and 1806, bringing together selected letters and unpublished poems to illuminate Cowper's personal and literary life. Volume 2 (1803) contains personal letters from the period 1791-4, accompanied by Hayley's biographical remarks. Also included are appendices of some of Cowper's original poems and translations from Latin and Greek, notably sections from Horace and Virgil.

Be the first to review The Life.

The Life, and Posthumous Writings, of William Cowper, Esqr.: Volume 2