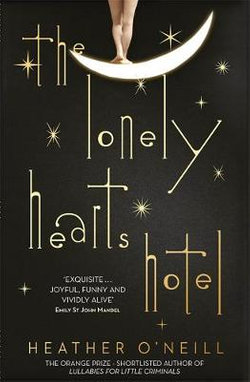 Longlisted for the 2017 Women's Prize for Fiction

A novel about childhood damage and the redemptive power of art from an author twice listed for the Women's Prize and the Giller Prize.

Two children were born in the Montreal winter of 1914: Pierrot of a twelve-year-old mother named Ignorance; Rose, rescued from a snowdrift. They were fated to meet in the Catholic orphanage. There, in the face of cold, hunger and unpredictable beatings, Rose and Pierrot create a world of talking bears, of circus tricks and a secret language; shielding the spark of their curiosity from the terrorism of those meant to protect them. But even the most extraordinary of spirits can be hurt - especially when it comes disguised as love - and Rose and Pierrot are torn apart.

When they meet again, each will have changed; having struggled through the Depression, through what they have done to fill the absence of the other. But their childhood vision remains - a dream to storm the world, a spectacle, an extravaganza that will lift them out of the gutter and onto a glittering stage. Rose has the means, Pierrot the talent; but their fame will come at a cost, for in the roaring twenties little that is pure remains so for long, and understanding this will bring Rose to a new destiny.

Heather O'Neill's imagination and language are like no other. In this she has crafted a dazzling circus of a novel that takes us from the underbellies of pre-war Montreal and Prohibition New York, to a theatre of magic where anything is possible - where an orphan girl can become a gangster queen, and a ruined innocence can be redeemed.

Heather O'Neill is a novelist, poet, short-story writer, screenwriter, and essayist. Lullabies for Little Criminals, her debut novel, was published in 2007 to international critical acclaim and was shortlisted for the Orange Prize for Fiction.

Her second novel, The Girl who was Saturday Night, was longlisted for the Baileys Women's Fiction Prize, and shortlisted for the Giller Prize, as was her collection of short stories, Daydreams of Angels.

Her third novel, The Lonely Hearts Hotel was longlisted for the Baileys prize. Born and raised in Montreal, O'Neill lives there today with her daughter.

Be the first to review The Lonely Hearts Hotel. 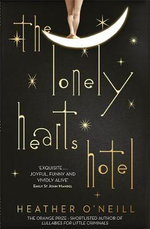 Historical romance Women's Prize for Fiction
Hold on while we process your request.