He too began to chase the great pierrot through the corridors of the chateau...

A novel of desperate yearning and vanished adolescence, the story of Meaulnes and his restless search for a lost, enchanted world has the atmosphere of a dream and the purity of a fairy tale.

Alain-Fournier was born in 1886, the son of a country school-master.

He was educated at Brest and in Paris, where he met and fell in love with the original Yvonne, who influenced his whole life and work.

The Lost Estate (Le Grand Meaulnes), his only completed novel, was published in 1912. Two years later, Alain-Fournier was killed in action on the Western Front.

Be the first to review The Lost Estate. 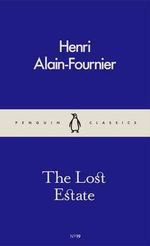