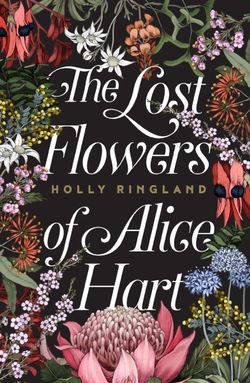 The Lost Flowers of Alice Hart 5

the bestselling debut novel of 2018

The most enchanting debut novel of 2018, this is an irresistible, deeply moving and romantic story of a young girl, daughter of an abusive father, who has to learn the hard way that she can break the patterns of the past, live on her own terms and find her own strength.

An enchanting and captivating novel, about how our untold stories haunt us - and the stories we tell ourselves in order to survive.

After her family suffers a tragedy, nine-year-old Alice Hart is forced to leave her idyllic seaside home. She is taken in by her grandmother, June, a flower farmer who raises Alice on the language of Australian native flowers, a way to say the things that are too hard to speak.

Under the watchful eye of June and the women who run the farm, Alice settles, but grows up increasingly frustrated by how little she knows of her family's story. In her early twenties, Alice's life is thrown into upheaval again when she suffers devastating betrayal and loss. Desperate to outrun grief, Alice flees to the dramatically beautiful central Australian desert. In this otherworldly landscape Alice thinks she has found solace, until she meets a charismatic and ultimately dangerous man.

Spanning two decades, set between sugar cane fields by the sea, a native Australian flower farm, and a celestial crater in the central desert, The Lost Flowers of Alice Hart follows Alice's unforgettable journey, as she learns that the most powerful story she will ever possess is her own.

'Lush, powerful ... This is an engrossing novel imbued with passion and reverence for the Australian natural world, with a cast of characters that inspire affection in the reader even as they make mistakes. Those who couldn't put down The Natural Way of Things will find a gentler but no less compelling journey of female survival in this novel.' Bookseller + Publisher

'There's an aching heart beating through Holly Ringland's narrative that although at times seems almost broken, is stitched back together with shards of optimism that offer constant hope. These are characters we love, care about and want to nurture... A vivid and brave tale of love, loss and inner power.' Australian Women's Weekly

'At its heart, this book is about finding a way to care for yourself, in a world that sometimes likes to step on its flowers' Courier Mail

View more reviews for The Lost Flowers of Alice Hart

The Lost Flowers of Alice Hart