The Making of Christina

Interior designer Christina Clemente is caught off guard by an intense affair with her charismatic client, Jackson Plummer.

He quickly becomes the cure to Christina's loneliness and a surrogate father to her young daughter Bianca.

When Jackson suggests moving to a rundown farm in the mountains, Christina soon forgets her initial hesitation and absorbs herself in restoring the rambling century-old house, Bartholemews Run, becoming obsessed with solving its mysterious history.

But while living on the isolated farm, her once effervescent child transforms into a quiet sullen teenager and Christina increasingly struggles to connect with her.

Because Bianca has a secret.

And the monstrous truth threatens to destroy them all.

Meredith Jaffe is a writer and occasional book critic. For four years she wrote the weekly literary column 'The Bookshelf' for the online women's magazine The Hoopla; sharing literary news, reviewing books and interviewing writers.

As a keen believer in the power of literacy, Meredith volunteers at The Footpath Library where she manages their annual EPIC! writing competition for school children.

She is currently working on her next novel in between riding her horses and enjoying farm life with her family on the beautiful NSW south coast.

Be the first to review The Making of Christina. 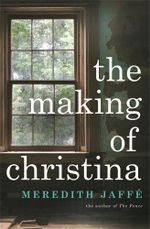 The Making of Christina