I slept very comfortably with half a dozen smoke-dried human skulls suspended over my head...

Alfred Russel Wallace left to explore the islands of southeast Asia an obscure naturalist; he returned eight years later an acclaimed scientist and co-discoverer of the theory of evolution. This is his vivid, exhilarating and heroic account of his travels across the entire Malay world, from Singapore to the western edges of New Guinea.

With exploratory zeal and lyrical brilliance, he describes battling through jungles, enduring seasickness and fever, meeting head hunters, marvelling at birds of paradise and collecting countless new species, as he made discoveries that changed our view of the world.

Alfred Russel Wallace (1823-1913) was one of the most important and likeable British scientists of the 19th century. A field researcher of genius, he spent many years in Brazil and southeast Asia, identifying many new species and, independently of Darwin, before developing - in parallel to Darwin - the theory of evolution through natural selection.

He effectively created the whole field of 'bio-geography', with the great split between Eurasian and Australasian flora and fauna, which runs through the Malay archipelago, now named the Wallace Line.

His research on warning colouration and speciation continues to shape modern research. During his travels in southeast Asia he collected an estimated quarter of a million specimens.

Be the first to review The Malay Archipelago. 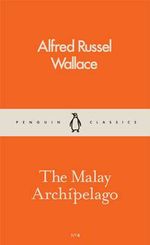