Includes The Maze Runner, The Scorch Trials & The Death Cure in a collectible slipcase

The complete Maze Runner series in a boxed set!

The series is set in a postapocalyptic reality, where violence, disease and lies threaten to destroy much more than the lives of the young Gladers. But the truth is more dangerous than any of them could have ever imagined. The maze is only the beginning.

Includes The Maze Runner, The Scorch Trials and The Death Cure in a collectible slipcase.

When the doors of the lift crank open, the only thing Thomas remembers is his first name. But he's not alone. He's surrounded by boys who welcome him to the Glade a walled encampment at the centre of a bizarre and terrible stone maze. Like Thomas, the Gladers don't know why or how they came to be there - or what's happened to the world outside. All they know is that every morning when the walls slide back, they will risk everything even the Grievers, half-machine, half-animal horror that patrol its corridors, to try and find out.

The Scorch Trials picks up where The Maze Runner left off. The Gladers have escaped the Maze, but now they face an even more treacherous challenge on the open roads of a devastated planet. And Wicked has made sure to adjust the variables and stack the odds against them. Can Thomas survive in such a violent world?

The Trials are over. Wicked have collected all the information they can. Now it's up to the Gladers to complete the blueprint for the cure to the Flare with a final voluntary test. But something has happened that no-one at Wicked has foreseen: Thomas has remembered more than they think. And he knows Wicked can't be trusted ...The time for lies is over. But the truth is more dangerous than anyone could have imagined. With the Gladers divided, can they all make it? 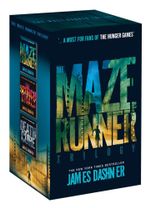