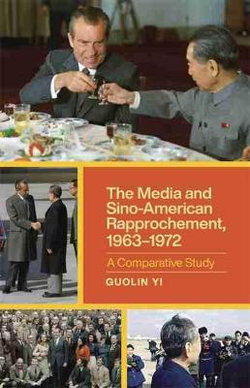 An important new cultural study of the Cold War, Guolin Yi?s The Media and Sino-American Rapprochement, 1963?1972 analyzes how the media in both countries shaped public perceptions of the changing relations between China and the United States in the decade prior to Richard Nixon?s visit to Beijing.

This book offers the first systematic study of Cankao Xiaoxi (Reference News), an internal Chinese newspaper that carried relatively objective stories the Xinhua News Agency translated from world news media for circulation among Communist cadres. As the main channel for the cadres to learn about the outside world, this newspaper provides a window into China?s evolving foreign policy, including the reception of signals from the Nixon administration. Yi compares this internal communications channel with the public accounts contained in the more widely circulated newspaper People?s Daily, a chief propaganda outlet of the Chinese Communist Party (CCP) directed at its own people and China watchers all over the world. A third level of communication emerges in classified CCP instructions and government documents. By approaching the Chinese communication system on three levels?internal, public, and classified?Yi?s analysis demonstrates how people at different positions in the political hierarchy accessed varying types of information, allowing him to chart the development of Beijing?s approach to the U.S. government.

In a corresponding analysis of the defining features of American reporting on China, Yi considers the impact of government-media relationships in the United States during the Cold War. Alongside prominent magazines and newspapers, particularly the New York Times and the Washington Post in their differing coverage of key events, Yi discusses television networks, which proved vital for promoting the success of Ping-Pong Diplomacy and the impact of Nixon?s visit in 1972.

With its comparative study of news outlets in the two countries, The Media and Sino-American Rapprochement, 1963?1972 presents a thorough and comprehensive perspective on the role of the media in influencing domestic Chinese and American public opinion during a critical decade.

Be the first to review The Media and Sino-American Rapprochement.