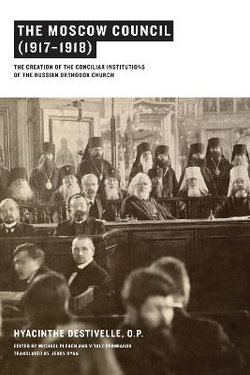 The Creation of the Conciliar Institutions of the Russian Orthodox Church

by Hyacinthe Destivelle, Vitaly Permiakov and Michael Plekon
Hardback
Publication Date: 30/05/2015
Be the first to write a review
Tweet
$191.12
Spend another {0} to pay with
or 4 easy payments of $47.78 with

By the early twentieth century, a genuine renaissance of religious thought and a desire for ecclesial reform were emerging in the Russian Orthodox Church. With the end of tsarist rule and widespread dissatisfaction with government control of all aspects of church life, conditions were ripe for the Moscow Council of 1917-1918 to come into being.

The council was a major event in the history of the Orthodox Church. After years of struggle for reform against political and ecclesiastical resistance, the bishops, clergy, monastics, and laity who formed the Moscow Council were able to listen to one other and make sweeping decisions intended to renew the Russian Orthodox Church. Council members sought change in every imaginable area--from seminaries and monasteries, to parishes and schools, to the place of women in church life and governance. Like Vatican II, the Moscow Council emphasized the mission of the church in and to the world.

Destivelle's study not only discusses the council and its resolutions but also provides the historical, political, social, and cultural context that preceded the council. In the only comprehensive and probing account of the council, he discusses its procedures and achievements, augmented by substantial appendices of translated conciliar documents.

Tragically, due to the Revolution, the council's decisions could not be implemented to the extent its members hoped. Despite current trends in the Russian church away from the Moscow Council's vision, the council's accomplishments remain as models for renewal in the Eastern churches.