The bestselling author of The Secrets of Midwives delivers her most powerful novel yet.

Alice and her daughter Zoe have been a team of two all their lives. With no family to speak of, and the identity of Zoe's father shrouded in mystery, they've never needed anyone else until Alice gets sick.

Desperate to find stability for Zoe, Alice reaches out to two near-strangers: Kate, her oncology nurse, and Sonja, her social worker. As the lives of the three women become inextricably tied, a chain of events is set into motion, forcing them to confront their deepest fears and secrets.

Imbued with heart and humour in even the darkest moments, The Mother's Promise is an unforgettable novel about the strength of a mother's love. Sally Hepworth has lived around the world, spending extended periods in Singapore, the U.K. and Canada, where she worked in event management and Human Resources. While on maternity leave, Sally finally fulfilled a lifelong dream to write, the result of which was Love Like the French, published in Germany in 2014.

While pregnant with her second child, Sally wrote The Secrets of Midwives, published worldwide in English, as well as in France, Italy, Germany, the Czech Republic and Slovakia in 2015. A novel about three generations of midwives, The Secrets of Midwives asks readers what makes a mother and what role biology plays in the making and binding of a family.

The Secrets of Midwives has been labelled "enchanting" by The Herald Sun and "smart and engaging" by Publisher's Weekly and New York Times bestselling authors Liane Moriarty and Emily Giffin have praised Sally's debut English language novel as "women's fiction at its finest" and "totally absorbing".

The Things We Keep and was published in February 2016. She is currently working on her next novel.

Be the first to review The Mother'S Promise. 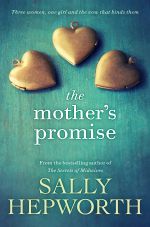