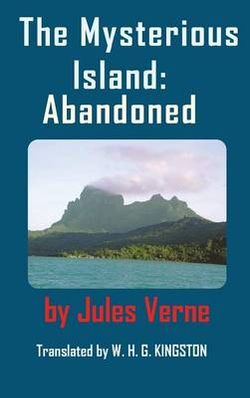 This book is the second volume of the three volumes entitled Dropped from the Clouds, The Abandoned, and The Secret of the Island. After flying in stormy weather for several days, the group crash-lands on a cliff-bound, volcanic, unknown (and fictitious) island, described as being located at 34 57 S 150 30 W, about 2,500 kilometres (1,600 mi) east of New Zealand. (In reality, the closest island is Marotiri, located at 27 55 S 143 26 W. In location and description though, the phantom island Ernest Legouve Reef may correspond to the rock that is left of the mysterious island at the end of the novel.) They name it "Lincoln Island" in honor of their president, Abraham Lincoln. With the knowledge of the brilliant engineer Smith, the five are able to sustain themselves on the island, producing fire, pottery, bricks, nitroglycerin, iron, a simple electric telegraph, a home on a stony cliffside called "Granite House," and even a seaworthy ship. They also manage to figure out their geographical location. Verne was born to bourgeois parents in the seaport of Nantes, where he was trained to follow in his father's footsteps as a lawyer, but quit the profession early in life to write for magazines and the stage. His collaboration with the publisher Pierre-Jules Hetzel led to the creation of the Voyages Extraordinaires, a widely popular series of scrupulously researched adventure novels including Journey to the Center of the Earth, Twenty Thousand Leagues Under the Sea, and Around the World in Eighty Days. Verne has been the second most-translated author in the world since 1979, ranking between the English-language writers Agatha Christie and William Shakespeare; he was probably was the most-translated during the 1960s and 1970s. He has sometimes been called "The Father of Science Fiction," a title also often given to H. G. Wells and Hugo Gernsback."

Jules Verne (1828-1905) was a French novelist and playwright best known for his epic adventures, including Twenty Thousand Leagues under the Sea, Journey to the Center of the Earth, and Around the World in Eighty Days.

A true visionary and master storyteller, Verne foresaw the skyscraper, the submarine, and the airplane, among many other inventions, and he is often regarded as the 'Father of Science Fiction.'

Be the first to review The Mysterious Island.