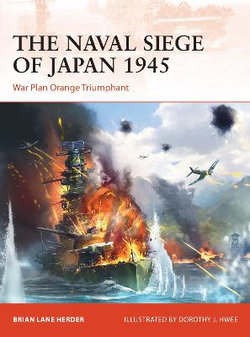 A highly illustrated study of the last great campaign in the Pacific Theatre in World War II- the US Navy and Royal Navy's air, surface, and submarine attacks on the Japanese Home Islands.

The final months of Allied naval bombardments on the Home Islands during World War II have, for whatever reason, frequently been overlooked by historians. Yet the Allies' final naval campaign against Japan involved the largest and arguably most successful wartime naval fleet ever assembled, and was the climax to the greatest naval war in history.

Though suffering grievous losses during its early attacks, by July 1945 the United States Third Fleet wielded 1,400 aircraft just off the coast of Japan, while Task Force 37, the British Pacific Fleet's carrier and battleship striking force, was the most powerful single formation ever assembled by the Royal Navy.

In the final months of the war the Third Fleet's 20 American and British aircraft carriers would hurl over 10,000 aerial sorties against the Home Islands, whilst another ten Allied battleships would inflict numerous morale-destroying shellings on Japanese coastal cities. In this illustrated study, historian Brian Lane Herder draws on primary sources and expert analysis to chronicle the full story of the Allies' Navy Siege of Japan from February 1945 to the very last days of World War II.

Born in 1981, Brian Lane Herder graduated with a BA in History from the University of Kansas in 2003 and a Masters of Library Science from Emporia State University in 2009.

He is a legislative librarian for the Kansas state government and his historical research interests include the US military, naval warfare and World War II. He lives in Topeka, Kansas, USA.

Singpore born and bred, Dorothy J. Hwee started her career at Imaginary Friends Studios. LucasArts was her first stepping stone into the video game industry as a concept artist, and she has had the privilege of working with some of the great art directors from LucasFilm.

Be the first to review The Naval Siege of Japan 1945.