If any ambitious TV producers are looking for a] multi-part fantasy to adapt after the success of HBO s Game of Thrones . . . Robert Redick s impressive Chathrand Voyage series . . . has it all. SFX
Robert V. S. Redick brings his acclaimed fantasy series The Chathrand Voyage to a triumphant close that merits comparison to the work of such masters as George R. R. Martin, Philip Pullman, and J.R.R. Tolkien himself. The evil sorcerer Arunis is dead, yet the danger has not ended. For as he fell, beheaded by the young warrior-woman Thasha Isiq, Arunis summoned the Swarm of Night, a demonic entity that feasts on death and grows like a plague. If the Swarm is not destroyed, the world of Alifros will become a vast graveyard. Now Thasha and her comrades the tarboy Pazel Pathkendle and the mysterious wizard Ramachni begin a quest that seems all but impossible. Yet there is hope: One person has the power to stand against the Swarm: the great mage Erithusme. Long thought dead, Erithusme lives, buried deep in Thasha s soul. But for the mage to live again, Thasha Isiq may have to die.
Praise for The Night of the Swarm
Robert Redick is an extraordinary talent. Karen Miller, bestselling author of The Innocent Mage
Robert V. S. Redick has developed into one of the most exciting young voices in fantasy today. Fantasy Book Critic
Redick] pulls off epic fantasy with a great deal of style, giving his readers everything they want along with a big bag of surprises. Starburst Magazine
The Night of the Swarm is a nail-biting, non-stop action adventure that would thrill any fantasy novel reader Tome Tender
I raced through The Night of the Swarm. There is a ton of action, but also plenty of interaction between the many characters. There are new challenges as well as old problems to be dealt with. Not everything gets tidied up perfectly, which I feel is a strength, since that s how life is. Books You Can Die in the Middle of" 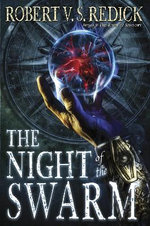