As it reaches its thunderous conclusion. Robert V.S. Redick's stunning and original fantasy series combines the invention of Scott Lynch with the power of Philip Pullman. The mighty centuries old ship, Chathrand is long gone ...At the centre of an enchanted forest stands a clearing. Above it looms a ruined fragment of a vast tower. At its base, a group of friends. Exhausted, terrified. They stand around the body of a sorcerer, Arunis. They have slain this foe, but not before he unleashed the Swarm of Night, an ever-growing cloud of annihilation that is even now spreading across the world of Alifros. Arunis summoned the Swarm using the Nilstone, an artifact from the land of the dead. And only the Nilstone has the power to banish the Swarm again. But to do this the friends, Pazel, Thasha, Neeps and the mage Ramachni, must pass through a deadly, war-torn world, by land and sea, to the very maw of death's kingdom. Only there, far from any hope of rescue, can the Nilstone be cast away. But the Nilstone is no longer a secret. The sorceress Macadra is searching for the travelers. And while they have only each other to rely on, Macadra has an empire at her command. 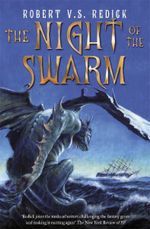