First love has lifelong consequences, but Paul doesn’t know anything about that at nineteen. At nineteen, he’s proud of the fact his relationship flies in the face of social convention.

As he grows older, the demands placed on Paul by love become far greater than he could possibly have foreseen.

Tender and wise, The Only Story is a deeply moving novel by one of fiction’s greatest mappers of the human heart.

How to convey the brilliance of this book? I could start by saying that The Only Story is a wonderful and achingly beautiful book about the ephemeral nature of love and the slipperiness of memory.

Paul looks back over the last 50 years of his life and reflects on an affair he had as a student with the middle-aged Susan. As a nonchalant youth of the British upper-class suburban world of tennis clubs, golfing stockbrokers and unhappy couples in the 60's, Paul had stumbled along with the best intentions. He framed his love for Susan as a heroic quest for freedom from suffocating parental expectations, but consequences follow even the smallest of acts. What had once seemed simple and carefree soon becomes a complex and painful burden, where words said and roads taken become irredeemable.

Soren Kierkegaard once famously said that "life can only be understood backwards, but it must be lived forwards." Julian Barnes shows us that understanding life backwards is much trickier than you'd think - it keeps transforming, with new understandings forcing out the old. With The Only Story, he has created another thoughtful and elegant masterpiece that is touching and deep, and arguably his best yet - it is certainly worthy of another Man Booker Prize 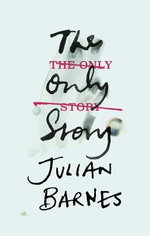 Contemporary fiction Classic fiction Book of the Month For Her Fiction
Hold on while we process your request.