High adventure and intrigue in the African jungle, on the high seas, and in the streets! There is always justice that needs to be served, whether it's in the present...or the past. Since 1936, "The Phantom" has been thrilling audiences who crave adventure! Nearly five centuries ago, during a daring raid at sea, pirates took the life of merchant ship captain Christopher Standish. In the heat of the pitched battle aboard the ship, Standish's son was knocked overboard to wash ashore on a remote beach. After stumbling upon the body of his father's killer, young Standish swore an oath on the murderer's skull to devote his life, and the lives of his sons and their sons, to the destruction of piracy, greed, cruelty, and injustice. To the outside world, this man, seemingly immortal, has always worn the mask. As the legend grew, it transcended the life of any one mortal. And that legend became "The Phantom!" "The Phantom Chronicles Volume 2" contains 15 all-new prose stories, complete with spot illustrations. Plus, for the first time anywhere, this volume details the never-before-revealed, first-ever team-up of The Phantom and The Green Hornet, as scribed by master wordsmith Harlan Ellison!
This work features an introduction by "The Phantom" creator's daughter, Diane Falk!

Be the first to review The Phantom Chronicles: v. 2. 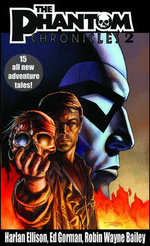 Graphic novels: superheroes & super-villains Adventure
Hold on while we process your request.