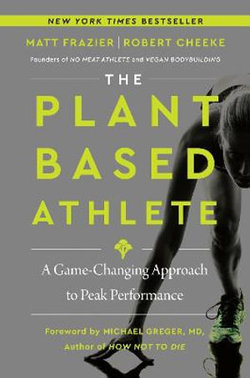 A Game-Changing Approach to Peak Performance

Foreword by Michael Greger, MD, author of the bestselling How Not to Die

A captivating and persuasive scientific exploration of the athletic benefits of a plant-based diet, featuring interviews with stars who've made the switch from meat to plants.

Instead of chocolate milk and grilled chicken, the highest-performing athletes in the world are eating salads, nuts, berries, and whole grains to fuel their bodies. Research has shown that a plant-based diet offers athletes the greatest possible recovery times, cell oxidation, injury prevention, and restorative sleep, and allows them to train more effectively, with better results.&nbsp;

No longer a fad, the plant-based lifestyle is being adopted by a wide-ranging group of athletes of every age. The proof it works? Championship rings, first place trophies, and careers that extend well into the 30s, 40s, and beyond. In this outstanding guide that is sure to become a touchstone, Matt Frazier, the founder of the popular No Meat Athlete community, and Robert Cheeke, one of the most connected plant-based athletes in the world of strength training, introduce the benefits of the plant-based diet, to help anyone bolster health and gain an edge on the competition.&nbsp;

The Plant-Based Athlete offers powerful proof that the human body doesn't need meat, eggs, or dairy to be strong, and shows how a consciously calibrated plant-based diet is the secret to attaining physical goals you might have once thought were out of reach. Here are just a few athletes who have discovered the power of plants:

ALEX MORGAN, who catapulted the US women's soccer team to a World Cup championship, credited a plant-based diet for her strength and endurance.

VENUS WILLIAMS, who turned to plant-based eating to alleviate a chronic condition, and in less than a year went from pain to winning a Wimbledon title and an Olympic Gold Medal, and reclaimed her #1 world ranking.

The Plant-Based Athlete is the definitive guide to adopting a plant-based lifestyle and using its power to help you achieve your goals. Featuring more than 60 recipes, insights from famous plant-based athletes, and scientific research, it is the ultimate guide for the growing community of vegans and the workouts that power them every day.

Matt Frazier is a vegan ultramarathoner and founder of the No Meat Athlete movement (www.nomeatathlete.com).

In 2014, Greatist magazine named Matt one of the '100 Most Influential People in Health & Fitness.'

He is the author of The No Meat Athlete Cookbook and is featured regularly in running magazines, websites, and books, including Thrive Foods by Brendan Brazier and Finding Ultra by Rich Roll.

Be the first to review The Plant-Based Athlete.

by Matt Frazier and Robert Cheeke