The Poisonwood Bible tells the story of an American family in the Congo during a time of tremendous political and social upheaval.

The story is told by the wife and four daughters of Nathan Price, a fierce evangelical Baptist who takes his family and mission to the Belgian Congo in 1959. They carry with them all they believe they will need from home, but soon find that all of it - from garden seeds to Scripture - is calamitously transformed on African soil. This tale of one family's tragic undoing and remarkable reconstruction, over the course of three decades in postcolonial Africa, is set against one of history's most dramatic political parables.

The Poisonwood Bible dances between the darkly comic human failings and inspiring poetic justices of our times. In a compelling exploration of religion, conscience, imperialist arrogance, and the many paths to redemption, Barbara Kingsolver has written a novel of overwhelming power and passion.

This modern classic beautifully repackaged to tie-in with the paperback of Flight Behaviour.

Barbara Kingsolver is one of the most important voices of our time. Barbara Kingsolver’s previous fourteen works of fiction and non-fiction have been translated into dozens of languages and earned a devoted readership.

She won the Orange Prize in 2010 for The Lacuna and her novel Flight Behaviour was shortlisted for the Women’s Prize for Fiction.

In 2000 she was awarded the National Humanities Medal, her country's highest honour for service through the arts. Before she made her living as a writer, Kingsolver earned degrees in biology and worked as a scientist. She now lives with her family on a farm in southern Appalachia.

Be the first to review The Poisonwood Bible. 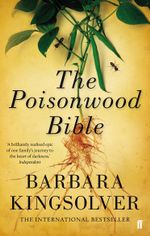