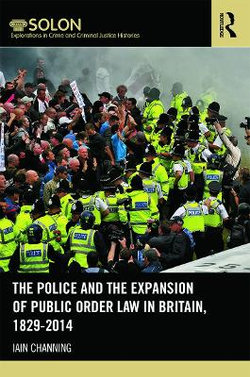 The Police and the Expansion of Public Order Law in Britain, 1829-2014

Incidences of public disorder, and the manner in which they have been suppressed, have repeatedly ignited debate on the role of policing, the effectiveness of current legislation and the implications for human rights and civil liberties. These same issues have reverberated throughout British history, and have frequently resulted in the enactment of new legislation that reactively aimed to counter the specific concern of that era. This book offers a detailed analysis of the expansion of public order law in the context of the historical and political developments in British society.

The correlation of key historical events and the enactment of consequent legislation is a key theme that resonates throughout the book, and demonstrates the expanding influence of the law on public assemblies and protest, which has continued to criminalise and prohibit certain social behaviours. Crucial movements in Britain's social and political history who have all engaged in, or have provoked public disorder, are examined in the book. Other incidents of riot and disorder, such as the Featherstone Riot (1893), the Battle of Cable Street (1936), the Inner City Riots (1980s) and the UK riots (2011) are also covered.

By positioning legal developments within their historical context, the book demonstrates the ebb and flow between the prominence of the competing demands of the liberties of free expression and assembly on the one hand and the protection of the general public and property on the other. This book is essential reading for academics and students in the fields of criminology, history and law.

Be the first to review The Police and the Expansion of Public Order Law in Britain.

The Police and the Expansion of Public Order Law in Britain, 1829-2014