An Alt-History of the United States

It all started with a desk made from the hull of a British ship, the HMS Resolute, a gift from Queen Victoria.

The President's desk, sitting in the Oval Office of the White House, has certainly seen some action from the Presidents who have sat behind it and made the decisions that have affected the history of the world. In this highly entertaining romp through American history, Shaun Micallef takes us inside the Oval Office to observe each President at work at the desk. Capturing their widely varying personalities and traits we see the evolution of the most powerful country in the world from the men who have sat at the desk.

Certainly this is an alternative history of the US with an outrageous, adsurdist re-imagining of everyday life as President and an entirely new view of some of the events that have shaped the land of the free, America. Shaun Micallef is an Australian actor, comedian and writer.

After ten years of working in insurance law as a solicitor in Adelaide, Micallef moved to Melbourne to pursue a full-time comedy career in 1993. He first gained recognition as a cast member of the sketch comedy show Full Frontal, which led to a number of television roles including his own sketch show, The Micallef P(r)ogram(me), the sitcom Welcher & Welcher and the variety show Micallef Tonight.

He also fronted the satirical news comedy series Newstopia on SBS, hosted the game show Talkin' 'Bout Your Generation on Network Ten for four seasons, and Shaun Micallef's Mad as Hell on the ABC. He also co-created and starred in Mr & Mrs Murder on Network Ten. In addition to his television work Micallef has appeared on stage, most notably in the Australian production of Boeing Boeing and on radio as the co-host of Melbourne station Vega 91.5 FM's morning program.

Be the first to review The President's Desk. 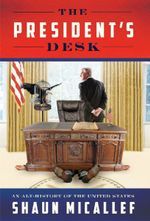 Humour Political leaders & leadership History of the Americas Australian Books
Hold on while we process your request.