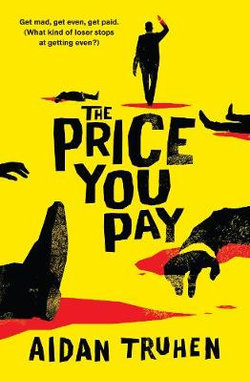 The Price You Pay

A wise-talking, hilarious, exhilaratingly extravagant revenge thriller: Get mad, get even, get paid. (What kind of loser stops at getting even?)

Didi's dead. That's sad. Jack Price isn't sad, because Jack Price doesn't care about Didi. Jack Price is just angry, because if anyone was going to brutally murder his cranky old neighbour, it was Jack Price.

The thing you've got to know about Jack Price is he is a very modern kind of coke dealer. High-grade zero-hours free-market no-strings narcotics start-up type operation. And some cold-blooded fuck murdering his neighbour doesn't bode well for business.

But when Jack takes matters into his own hands, he gets a contract taken out on him. An assassination-by-internationally-renowned-terrorist-organisation type contract. Now, on a level playing field against a team of professional killers, Jack would be seven shades of grey matter in a back alley. But Jack Price doesn't play fair. Jack Price is the Ho Chi Minh, the Warren Buffet, the Miley fucking Cyrus of avenging psychopaths And these guys are gonna pay.

Wise-talking, hilarious, exhilaratingly extravagant, treading a fine between genius and madness, The Price You Pay is the revenge thriller they warned you about.

Aidan Truhen is the pen name of a writer gone AWOL. He is not your grandmother's crime novelist. The Price You Pay is the first Aidan Truhen novel. There'll be more, though, so you'll want to save up. That or move somewhere they don't sell books. Your call.

Be the first to review The Price You Pay.

The Price You Pay