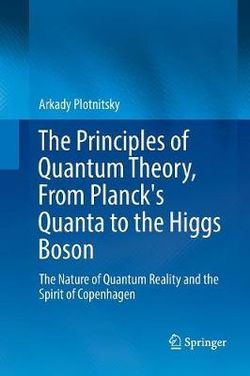 The Principles of Quantum Theory, From Planck's Quanta to the Higgs Boson

The Nature of Quantum Reality and the Spirit of Copenhagen

The book considers foundational thinking in quantum theory, focusing on the role the fundamental principles and principle thinking there, including thinking that leads to the invention of new principles, which is, the book contends, one of the ultimate achievements of theoretical thinking in physics and beyond. The focus on principles, prominent during the rise and in the immediate aftermath of quantum theory, has been uncommon in more recent discussions and debates concerning it. The book argues, however, that exploring the fundamental principles and principle thinking is exceptionally helpful in addressing the key issues at stake in quantum foundations and the seemingly interminable debates concerning them. Principle thinking led to major breakthroughs throughout the history of quantum theory, beginning with the old quantum theory and quantum mechanics, the first definitive quantum theory, which it remains within its proper (nonrelativistic) scope. It has, the book also argues, been equally important in quantum field theory, which has been the frontier of quantum theory for quite a while now, and more recently, in quantum information theory, where principle thinking was given new prominence. The approach allows the book to develop a new understanding of both the history and philosophy of quantum theory, from Planck's quantum to the Higgs boson, and beyond, and of the thinking the key founding figures, such as Einstein, Bohr, Heisenberg, Schroedinger, and Dirac, as well as some among more recent theorists. The book also extensively considers the nature of quantum probability, and contains a new interpretation of quantum mechanics, "the statistical Copenhagen interpretation." Overall, the book's argument is guided by what Heisenberg called "the spirit of Copenhagen," which is defined by three great divorces from the preceding foundational thinking in physics-reality from realism, probability from causality, and locality from relativity-and defined the fundamental principles of quantum theory accordingly.

Be the first to review The Principles of Quantum Theory.

The Principles of Quantum Theory, From Planck's Quanta to the Higgs Boson