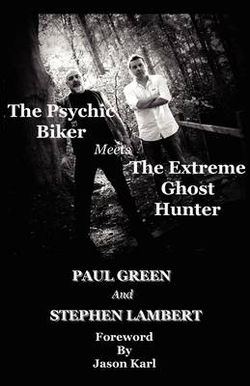 by Stephen Lambert and Paul Green

In Psychic Biker Meets Extreme Ghost Hunter, Paul Green and Stephen Lambert have undertaken the unenviable task of spending many days and nights searching for something, which, for the most of us, is not part of everyday life experience. In this book they take a candid look at the world of ghost hunting and the paranormal. They also reveal their thoughts on ghosts and hauntings, as they willingly seek to experience the things most people would run from in terror. All the locations are extreme and often previously un-examined. Sometimes they succeed, sometimes they fail but their findings are told exactly as it is...No frills! No airs! and no lies. You have been warned! Paul Green - The Psychic Biker, is unique in the psychic world, a gifted medium and psychic, who was once an ardent sceptic. A hard-core, no-nonsense biker, who would look more at home on the door of a nightclub than offering his services as an empathetic, psychic medium. Make no mistake, Paul is opinionated and brutally honest, yet he is respected by all who know him, or as he would describe himself: "Attitude with Empathy". Stephen Lambert - Extreme Ghost Hunter, has vast experience investigating the paranormal.
Stephen has spent countless dark hours at haunted locations working alone on paranormal vigils and he has led teams of other paranormal investigators all over the British Isles. He is a firm believer in taking ghost hunting back to the basics, with a hard-line outlook on seeking out the truth within the previously unexplained. Stephen is also a talented historian which allows him to combine the results of his investigations with valuable academic research.

Be the first to review The Psychic Biker Meets the Extreme Ghost Hunter. 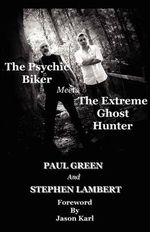 by Stephen Lambert and Paul Green

Mind Unexplained phenomena / the paranormal
Hold on while we process your request.