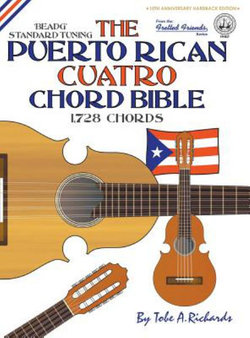 The Puerto Rican Cuatro Chord Bible, with its 1,728 chords offers a complete solution for both beginner and experienced professional musician alike. The layout is uncomplicated and follows a logical musical progression from standard major chords up to the more esoteric thirteenths used by many jazz players. To accompany the 1,728 chords, a further 576 possible moveable chord configurations are included, together with a useful range of slash chords, reflecting the popularity of this type of chord in many of today's artist and compilation topline songbooks.

This highly comprehensive guide provides the musician with no fewer than 68 different types of chord in all twelve keys, making it the definitive publication for the Puerto Rican cuatro. Whether you play folk, rock, pop, jazz or any other type of popular music, The Puerto Rican Cuatro Chord Bible makes the ideal reference source for all occasions.

The aim of this guide is to provide the musician with the flexibility only really offered to guitar and keyboard players in the past. Now, with the help of The Puerto Rican Cuatro Chord Bible, musicians will be able to pick up any songbook and instantly have access to even the most complex and advanced chords.

This popular guide is available for the first time in a brand new luxury 10th anniversary hardback edition.

Be the first to review The Puerto Rican Cuatro Chord Bible.

by Tobe A. Richards