In a small town on the land's edge, in the strange space at a war's end, a widow, a poet and a doctor each try to find their own peace, and their own new story.

In Thirroul, in 1948, people chase their dreams through the books in the railway's library. Anikka Lachlan searches for solace after her life is destroyed by a single random act. Roy McKinnon, who found poetry in the mess of war, has lost his words and his hope. Frank Draper is trapped by the guilt of those his treatment and care failed on their first day of freedom. All three struggle with the same question: how now to be alive.

Written in clear, shining prose, with an eloquent understanding of the human heart, The Railwayman's Wife explores the power of beginnings and endings, and how hard it can be sometimes to tell them apart. It's a story of life, loss and what comes after; of connection and separation, longing and acceptance. Most of all, it celebrates love in all its forms, and the beauty of discovering that loving someone can be as extraordinary as being loved yourself. Ashley Hay's work includes fiction, narrative non-fiction, journalism, essays and reviews. Her novels have been longlisted for awards including the Miles Franklin and the International IMPAC Dublin Literary Award, and shortlisted for categories in the WA Premier's Prize, the NSW Premier's Prize and the Commonwealth Writers' Prize, as well as the Nita B. Kibble Award.

Her second novel, The Railwayman's Wife, was awarded the Colin Roderick Award by the Foundation for Australian Literary Studies, and also won the People's Choice at the NSW Premier's Literary Awards. It was also published in the UK, the US and in translation.

She was editor of Best Australian Science Writing 2014 and was awarded the 2015 Dahl Trust/ABR Fellowship, for which essay she won the 2016 Bragg UNSW Press Prize for Science Writing.

She lives in Brisbane. 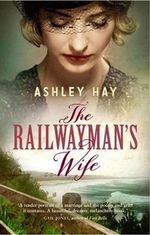