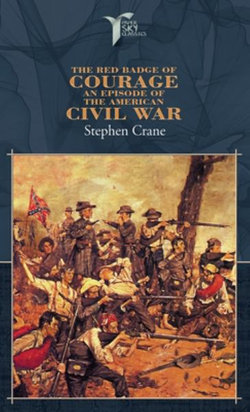 The Red Badge of Courage

An Episode of the American Civil War

On a cold day, the fictional 304th New York Infantry Regiment awaits battle beside a river. Eighteen-year-old Private Henry Fleming, remembering his romantic reasons for enlisting as well as his mother's resulting protests, wonders whether he will remain brave in the face of fear or turn and run. He is comforted by one of his friends from home, Jim Conklin, who admits that he would run from battle if his fellow soldiers also fled. During the regiment's first battle, Confederate soldiers charge, but are repelled. The enemy quickly regroups and attacks again, this time forcing some of the unprepared Union soldiers to flee. Fearing the battle is a lost cause, Henry deserts his regiment. It is not until after he reaches the rear of the army that he overhears a general announcing the Union's victory.


Ashamed, Henry escapes into a nearby forest, where he discovers a decaying body in a peaceful clearing. In his distress, he hurriedly leaves the clearing and stumbles upon a group of injured men returning from battle. One member of the group, a "tattered soldier", asks Henry where he is wounded, but the youth dodges the question. Among the group is Jim Conklin, who has been shot in the side and is suffering delirium from blood loss. Jim eventually dies of his injury, defiantly resisting aid from his friend, and an enraged and helpless Henry runs from the wounded soldiers. He next joins a retreating column that is in disarray. In the ensuing panic, a man hits Henry on the head with his rifle, wounding him. Exhausted, hungry, thirsty, and now wounded, Henry decides to return to his regiment regardless of his shame. When he arrives at camp, the other soldiers believe his injury resulted from a grazing bullet during battle. The other men care for the youth, dressing his wound.

Be the first to review The Red Badge of Courage.

The Red Badge of Courage