The Return of the Arinn

London has fallen to the Tyrant and now war threatens both Earth and the magical land of Tí­r. The fate of both worlds lies in the hands of five teenagers in this 'enthalling' epic (Los Angeles Times).

The Tyrant seeks to control the legendary Fàil, the one artefact that will allow him to cement his power for ever. The only people with any chance to stop him destroying not just the sister worlds of Earth and Tí­r but the in-between world of Dromenon as well are a handful of teenagers with supernatural powers.

Alan is leading his Shee army towards Ghork Mega, the Tyrant's capital city, but he's racked with doubt over his decisions. His girlfriend Kate, holder of the Second Power, is impulsive and stubborn - but she too is determined to stop this great evil. Mo is desperate to help, but she isn't sure she's brave enough to stand up to the villain. And on Earth, Mark, who wields the Third Power, is resourceful and fearless, but he's fighting Commander Seebox's Paramilitaries and Skulls.

Each of them has grown immeasurably since the day they fell through a mystical portal on Mount Slievenamon in Ireland into a magical world . . . but they are facing almost insurmountable challenges and an evil of unimaginable power.

Be the first to review The Return of the Arinn. 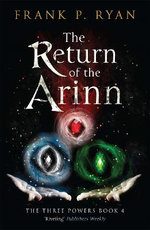 The Return of the Arinn