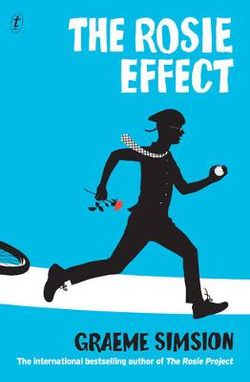 'We've got something to celebrate,' Rosie said. I am not fond of surprises, especially if they disrupt plans already in place. I assumed that she had achieved some important milestone with her thesis. Or perhaps she had been offered a place in the psychiatry-training programme. This would be extremely good news, and I estimated the probability of sex at greater than 80%. 'We're pregnant,' she said.

The Rosie Project was an international publishing phenomenon, with more than a million copies sold in over forty countries around the world. Now Graeme Simsion returns with the highly anticipated sequel, The Rosie Effect.

Don Tillman and Rosie Jarman are now married and living in New York. Don has been teaching while Rosie completes her second year at Columbia Medical School. Just as Don is about to announce that Gene, his philandering best friend from Australia, is coming to stay, Rosie drops a bombshell: she's pregnant. In true Tillman style, Don instantly becomes an expert on all things obstetric. But in between immersing himself in a new research study on parenting and implementing the Standardised Meal System (pregnancy version), Don's old weaknesses resurface. And while he strives to get the technicalities right, he gets the emotions all wrong, and risks losing Rosie when she needs him most.

The Rosie Effect is the charming and hilarious romantic comedy of the year. Graeme Simsion was born in Auckland and is a Melbourne-based writer of novels, short stories, plays, screenplays and two non-fiction books. The Rosie Project began life as a screenplay, winning the Australian Writers Guild/Inscription Award for Best Romantic Comedy before being adapted into a novel.

It went on to win the 2012 Victorian Premier's Literary Award for an unpublished manuscript and has since been sold around the world to over forty countries. Sony Pictures have optioned the film rights with Graeme contracted to write the script.

The Rosie Project won the 2014 ABIA for Best General Fiction Book, and was ultimately awarded Australian Book of the Year for 2014. The sequel, The Rosie Effect, was released in 2014 to great acclaim and also became a bestseller. His new book is The Best of Adam Sharp.