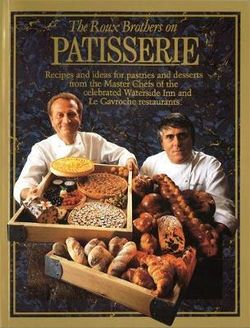 The Roux Brothers On Patisserie

Michel and Albert Roux are a culinary legend. In this book they turn their attention to the French art of Patisserie, pooling half a century of their collective knowledge and experience to create, not a general cookery book, but a culinary bible. The Roux brothers guide even the modest cook through the making of the simplest pastry to the most mouth-watering confection, achieving results once within the realm of only the professional chef.

With practical advice, tips and hints, the authors set out the various pastry, sponge and dough bases used for desserts and breads, and the creams and fruit-flavoured sauces that complement them. The main recipe section comprises Cold desserts and sweets, Hot desserts and sweets, Hot and cold fruit tarts, Ice creams and sorbets, Petits fours and canapes and finally Cakes. Each recipe lists the equipment needed and provides practical advice on preparation, with hints on presentation, storage and freezing. Finally, the Roux brothers reveal the techniques behind their spectacular, decorative sugar work.

Michel Roux is a legendary chef and one of the world's greatest experts on French cuisine. At his renowned restaurant, The Waterside Inn at Bray, he has held three Michelin stars for an astonishing 30 years. His career has been hugely successful ever since he opened his first restaurant, the acclaimed Le Gavroche in London, with his brother Albert in 1967.

He has appeared in several television series and regularly appears on Saturday Kitchen. In The Roux Legacy, televised in 2012, leading food critics and top chefs described the Roux family as the most important culinary influence ever in Britain.

Be the first to review The Roux Brothers On Patisserie.

The Roux Brothers On Patisserie

by Michel Roux and Albert Roux