Be the first to write a review
Tweet
14%
OFF RRP  $19.99 $17.25
The epic conclusion to Richelle Mead's New York Times bestselling Bloodlines series is finally here . . . Sydney Sage is an Alchemist, one of a group of humans who dabble in magic and serve to bridge the worlds of humans and vampires. They protect vampire secrets - and human lives. After their secret romance is exposed, Sydney and Adrian find themselves facing the wrath of both the Alchemists and the Moroi in this electrifying conclusion to Richelle Mead's New York Times bestselling Bloodlines series. When the life of someone they both love is put on the line, Sydney risks everything to hunt down a deadly former nemesis. Meanwhile, Adrian becomes enmeshed in a puzzle that could hold the key to a shocking secret about spirit magic, a secret that could shake the entire Moroi world.

We chats exclusively with Richelle Mead! Writing the finale in a series like Bloodlines is a balancing act. I want readers to feel satisfied when they walk away from it - I want them to feel that the story is resolving exactly as it needs to. Reading six books (twelve, if you count the Vampire Academy series, which Bloodlines is simply an extension of) is a huge investment of time and emotional energy for my readers, so they need to feel like that journey has paid off. That doesn’t mean the book has to have a perfectly happy ending. It doesn’t mean it has to have a tragic ending. It just has to have the right ending.
Along with that, I have to make sure everything gets wrapped up, which is difficult to do when you’re dealing with such a complex world and intricate plotlines - not to mention a series that’s famous for its cliffhangers! I’ll be the first to admit I love the emotional impact of those cliffhangers, of just really catching readers off -guard. I can get away with those in the middle of a series, but doing it in the last book is a no-no. When the Vampire Academy series ended, Last Sacrifice was seeded with several plotlines for Bloodlines to pick up on. So, that was purposely left with questions. But a lot of readers didn’t realise that or know there was a spin-off series coming to finish the saga. They’d thought I left them with all those loose threads and were understandably distraught. That won’t be the case this time, however. I know readers will pick out things they wish I’d write more about, but they won’t be left with any big holes at the end of The Ruby Circle.

One thing readers can also look forward to in this book is a whole bunch of little surprises about the world and characters. Over the years, I’ve been asked all sorts of things - like, just trivia and fun details. A bunch of those get answered for readers in The Ruby Circle, and I think fans of the series are going to love having some of the biggest VA/Bloodlines mysteries finally revealed! My editor and I debated over some of these because a lot are just thrown in for fun and don’t affect the larger plot. I kept telling her, “Wait, just wait…readers are going to love this. They NEED this.”

It’s definitely bittersweet bringing this saga to a close, but I think this is the right ending, and I hope readers will agree. I can also reassure readers that I don’t kill off the whole cast, so theoretically, the door is still open for me to go back and visit this world again. For now, it’s time for both me and the characters to take a vacation from each other, and I’m looking forward to exploring some exciting new stories and worlds with my readers!

Be the first to review The Ruby Circle: Bloodlines Book 6 . 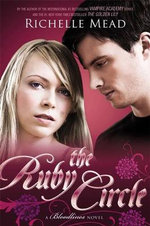