The Secret History and the Little Friend

The Secret History: A misfit at an exclusive New England college, Richard finds kindred spirits in the five eccentric students of his ancient Greek class. But his new friends have a horrific secret. When blackmail and violence threaten to blow their privileged lives apart, they drag Richard into the nightmare that engulfs them. And soon they enter a terrifying heart of darkness from which they may never return ...The Little Friend: Twelve-year-old Harriet is doing her best to grow up, which is not easy as her mother is permanently on medication, her father has silently moved to another city, and her serene sister rarely notices anything. All of them are still suffering from the shocking and mysterious death of her brother Robin twelve years earlier, and it seems to Harriet that the family may never recover. So, inspired by Captain Scott, Houdini, and Robert Louis Stevenson, she sets out with her only friend Hely to find Robin's murderer and punish him. But what starts out as a child's game soon becomes a dark and dangerous journey into the menacing underworld of a small Mississippi town.
Packaged together for the first time this deluxe edition features stunning silver-edged pages, with both books signed by Donna Tartt in Venetian ink. Born in Greenwood Mississippi, 1963, Donna Tartt was educated at the University of Mississippi and Bennington College and is the authour of three novels. They are The Secret History (1992), The Little Friend (2002), and The Goldfinch (2013). She won the WH Smith Literary Award for The Little Friend in 2003 and the Pulitzer Prize for fiction for The Goldfinch in 2014.

She lives in Mississippi and New York City.

Be the first to review The Secret History and the Little Friend. 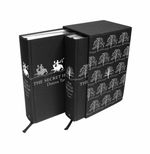 The Secret History and the Little Friend