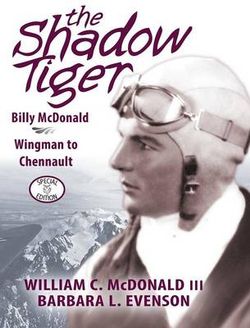 Billy McDonald of Birmingham, Alabama, had an adventurous and dangerous career as a pilot in the Golden Age of Flight, and into World War II.

He jumped from military cadet to wingman in Chennault's famed aerobatic flying group Three Men on a Flying Trapeze. In China, he moved from instructor for the Chinese Air Force to combat pilot flying Chennault's legendary Hawk 75 Special against the Japanese over Nanking in 1937. He began by ferrying world-famous passengers like Hemingway and high-value cargo like gold for the China National Aviation Corporation and then flew gasoline and gunpowder over The Hump (Himalayas) for Chennault's Flying Tigers and the Chinese Army.
Through it all, controversial and legendary aviator Claire Lee Chennault remained his mentor, often his boss and always his friend, indelibly shaping his life.

This is the story of a remarkable career, and a man who bore witness to some of the twentieth century's historic events and pivotal characters. Mac tells us the tale in his own words through newly-discovered photos, correspondence and manuscripts.

History of the Americas Warfare & defence

Be the first to review The Shadow Tiger.