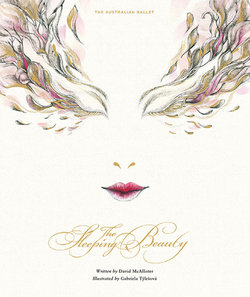 by David McAllister and Gabriela Tylesova
Hardback
Publication Date: 01/11/2017
Be the first to write a review
Tweet
$36.75

The story of The Sleeping Beauty spills over with fairies and princes, passion and despair, magnificence and splendour, and the ballet version of this classic tale is the most romantic and spectacular of all.

Australian Ballet Creative Director David McAllister’s impressive 2015 production of The Sleeping Beauty, ornamented by internationally celebrated designer Gabriela Tylesova’s lavish costumes and sets, cast a spell of delight on its audiences, and was a sellout success.

Now David McAllister and Gabriela Tylesova weave their magic again, transporting the enchantment of their 2015 production of The Sleeping Beauty to the pages of this book. David’s text and Gabriela’s illustrations recreate the world of this favourite ballet for readers to enjoy again and again.

Based on the spectacular Australian Ballet production of The Sleeping Beauty.

David McAllister was principal artist with The Australian Ballet for twelve years. During that time, David also danced as guest performer with Bolshoi Ballet, the Kirov Ballet, the Georgian State Ballet, The National Ballet of Canada, Birmingham Royal Ballet, and Singapore Dance Theatre and, in 1992, as part of a Royal Gala performance in London in the presence of the Princess of Wales.

Gabriela Tylesova was born in former Czechoslovakia and studied art in both Europe and Australia before graduating in Design at NIDA in 2000. She is an award-winning designer who has won international acclaim for her costume and set designs across the full spectrum of the arts, including theatre, opera, dance and film.

Be the first to review The Sleeping Beauty.

by David McAllister and Gabriela Tylesova