A rebel who becomes a queen

Following a bloody battle against foes on every side, Paige Mahoney has risen to the dangerous position of Underqueen, ruling over London's criminal population.

But, having turned her back on Jaxon Hall and with vengeful enemies still at large, the task of stabilising the fractured underworld has never seemed so challenging.

Little does Paige know that her reign may be cut short by the introduction of Senshield, a deadly technology that spells doom for the clairvoyant community and the world as they know it...

Samantha Shannon was born in west London in 1991. She started writing at the age of fifteen. Between 2010 and 2013 she studied English Language and Literature at St Anne's College, Oxford.

In 2013 she published The Bone Season, the first in a seven book series. The Mime Order followed in 2015. Both were international bestsellers and have been translated into twenty-six languages.

The film rights have been optioned by the Imaginarium Studios and 20th Century Fox. In 2014, Samantha Shannon was included on the Evening Standard's Power 1000 list. The Song Rising is her third novel.

Be the first to review The Song Rising. 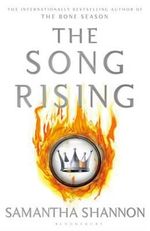