by Alex Ratt and Jules Faber

"Have you heard of Alex Ratt...no? Then maybe you have heard of Frances Watt? Goodnight Mice!, Parsley Rabbit's Book about Books and Kisses for Daddy are all award-winning books written by Frances Watt, who also writes under the name of Alex Ratt. Her books are simply hilarious and The Stinky Street Stories is no exception. This is one super-funny read to add to your collection." Sunday Mail

The first thing I noticed when I woke up on Sunday morning was a mysterious smell ...When Brian ('call me Brain - everyone does') awakes to a truly putrid pong he knows it is up to him and his friend Nerf to neutralise it. But that putrid pong is just the beginning, because life on Stinky Street is a riot of rotten reeks, awful aromas and sickening scents. So grab a peg (for your nose) or be flattened by the fumes!

Jules Faber is a multi-award-winning cartoonist and illustrator.

He has published numerous comic strips, worked for various newspapers, taught cartooning around Australia, been in multiple art exhibitions and has worked as an animator on a Disney show.

And on top of all that, he loves illustrating children's books, including Anh Do's WeirDo series (Scholastic), Helix and the Arrival by Damean Posner and the new Leo da Vinci series by Michael Pryor.

Be the first to review The Stinky Street Stories. 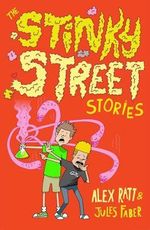 by Alex Ratt and Jules Faber