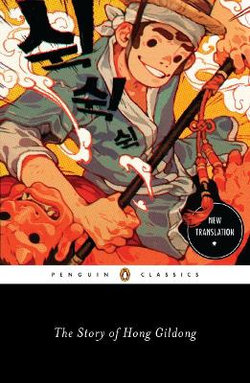 The Story of Hong Gildong

The Story of Hong Gildong is arguably the single most important work of classic Korean fiction. A fantastic story of adventure, it has been adapted into countless movies, television shows, novels, and comics in Korea. Until now, the earliest and fullest text of this incredible fable has been inaccessible to English readers.

Hong Gildong, the brilliant but illegitimate son of a noble government minister, cannot advance in society due to his second-class status, so he leaves home and becomes the leader of a band of outlaws. On the way to building his own empire and gaining acceptance from his family, Hong Gildong vanquishes assassins, battles monsters, and conquers kingdoms. Minsoo Kang's expressive and lively new translation finally makes the authoritative text of this premodern tale available in English, reintroducing a noble and righteous outlaw and sharing a beloved hallmark of Korean culture.

For more than sixty-five years, Penguin has been the leading publisher of classic literature in the English-speaking world. With more than 1,500 titles, Penguin Classics represents a global bookshelf of the best works throughout history and across genres and disciplines. Readers trust the series to provide authoritative texts enhanced by introductions and notes by distinguished scholars and contemporary authors, as well as up-to-date translations by award-winning translators.

About the Author
Minsoo Kang is an associate professor of European history at University of Missouri-St. Louis. He is the author of Sublime Dreams of Living Machines: The Automaton in the European Imagination and co-editor of Visions of the Industrial Age, 1830 - 1914: Modernity and the Anxiety of Representation in Europe.

Be the first to review The Story of Hong Gildong.

The Story of Hong Gildong