A ragtag group of orphans have defeated the Great Witch, but peace is yet to be attained: the Tyrant's control of the Fáil has increased so much that he now threatens Earth as well as Tir.
In dystopian London, Mark and Nantosueta, Queen of Monisle on Tir, are searching for Padraig O'Brien, the druidic guardian of the great sword to convince him to join the Resistance and vanquish the Razzmatazzers and the Skulls, whose sinister presence is spreading to New York, and to other great capitals of the world.
Meanwhile, Penny Postlethwaite, a gifted but emotionally troubled teenager, is mapping two Londons, the beleaguered "City Above" and the eerily fascinating "City Below."
On Tir, Alan Duval, leader of the Shee army, is mounting an attack on Ghork Mega, the Tyrant's capital city, but he faces obstacles at every turn.
And in Dromenon, Kate Shaunessy is exploring the colossal roots of the Tree of Life, as she finds herself descending into the Land of the Dead in her quest to find the legendary serpent-dragon Nidhoggr. The Tree of Life is afflicted with a mysterious malady, and Kate is faced with a difficult decision of whether to liberate Nidhoggr, who is a creature driven by chaos.
As the threat of war looms larger on both Tir and Earth, the labyrinthine cunning of the Tyrant becomes manifest. What is he building in the "City Below"? What horrors does he have in store for New York and other major cities of Earth?
Day by day and hour by hour, the looming threat grows in both worlds.

Be the first to review The Sword of Feimhin. 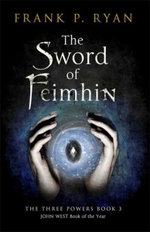