I know who killed my sister. I wrote this book for him.

Her killer was never caught, but Linda saw him.

Now, all these years later, she's just seen him again on TV.

He's become a well-known journalist, and Linda - a famous novelist and infamous recluse - knows no one will believe her if she accuses him. She does the only thing she can think of: she sets a trap, writing a thriller called Blood Sisters about the unsolved murder of a young woman.

When Blood Sisters is published, Linda agrees to give just one media interview. At home. To the one person who knows more about the case than she does...

Melanie Raabe began her working life as a journalist but secretly wrote books by night.

Her debut novel, The Trap, was an international bestseller.

Her second, The Stranger, remained on Der Spiegel's bestseller list for almost six months when it was first published in 2016. 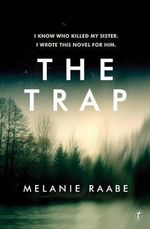