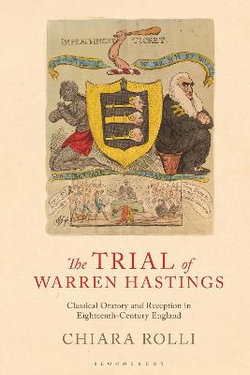 The Trial of Warren Hastings

The impeachment trial of Warren Hastings lasted from 1788 until 1795. Hastings was the first Governor-General of Bengal and his trial had a formative impact on the British Empire. Chiara Rolli shows that in an age when British education consisted mainly of classical studies, it was antique views of rhetoric and imperial governance that permeated the trial. Prosecutor Edmund Burke was figured as a modern-day Cicero fighting corruption in the colonies, while Hastings was Verres, the corrupt propraetor of Sicily in the first century BC. In their prosecution, both Burke and Richard Brinsley Sheridan employed certain coups de théâtre - such as fainting for emphasis - advised by Cicero and the later Roman rhetorician Quintilian, whose style of spectacular justice played particularly well amid the eighteenth-century vogue for sentimental drama. Burke's defence of natural rights and passion for extirpating vice in the colonies similarly reflected an admiration for Cicero, just as Hastings' preference to rule the conquered by means of their own traditions recalled models of Roman provincial administration. Using contemporary journalism, satire and other ephemera, the book reconstructs the public's equally profound grasp of these parallels. It illuminates new aspects of early British discourse around the Empire, and shows how deeply classical precedents influenced the cultural and political imaginations of eighteenth-century Britain.

Be the first to review The Trial of Warren Hastings.

The Trial of Warren Hastings