The True Story of Maddie Bright 1

The bestselling author of In Falling Snow returns with a spellbinding tale of friendship, love and loyalty

In 1920, seventeen-year-old Maddie Bright gratefully accepts a job as a serving girl on the royal tour of Australia by Edward, Prince of Wales. Maddie's talents soon earn her the respect of Helen Burns, the prince's vivacious press secretary, and Rupert Waters, his most loyal man, and Maddie is in awe of Edward himself, the 'people's' prince.

What starts as a desire to help her family, devastated by the recent war, becomes for Maddie a chance to work on something that matters. When the unthinkable happens, it is swift and life changing.

Decades later, Maddie Bright is living in a ramshackle house in Paddington, Brisbane. She has Ed, her drunken and devoted neighbour, to talk to, the television news to shout at, and door-knocker religions to join. But when London journalist Victoria Byrd gets the sniff of a story that might lead to the true identity of a famously reclusive writer, Maddie's version of her own story may change.

1920, 1981 and 1997: the strands twist across the seas and over two continents to build a compelling story of love and fame, motherhood and friendship. Set at key moments in the lives of two of the most loved and hated figures of the twentieth century, in Maddie Bright, a reader will find a friend and, by novel's close, that friend's true and moving story.

Mary-Rose MacColl's first novel, No Safe Place, was runner-up in the 1995 The Australian/Vogel's Literary award and her first non-fiction book, The Birth Wars, was a finalist in the 2009 Walkley Awards.

Her international bestselling In Falling Snow was published to great acclaim in 2012. Her fifth novel, Swimming Home, won The Courier-Mail 2016 People's Choice Queensland book of the Year Award.

Mary-Rose lives in Brisbane, Australia with her husband and son. 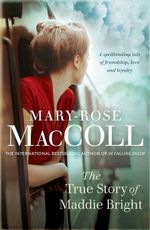 The True Story of Maddie Bright