The Twenty-First Century Will Be American

Allegations that America is in decline have become commonplace in the years since the Cold War ended in victory for the United States: Washington, it is said, is doomed to founder in decadence, like an imperial Rome collapsing under the weight of its armies. This thesis is energetically refuted by Alfredo Valladao. America, he believes, will dominate the twenty-first century because it alone has the means &ndash; and the will &ndash; to do so. It alone possesses the three qualities needed for supreme power: unequalled military force, the biggest and most dynamic economy on the planet, and a culture with universal ambitions. The author traces the course of history from the proclamation of Independence to the present-day metamorphosis into World-America. The prophets of decline, argues Valladao, are a century or two adrift: if a historical analogy must be made, it should be with Rome in triumph after its total victory over Carthage&mdash;the Roman Republic pregnant with an empire.

Be the first to review The Twenty-First Century Will Be American. 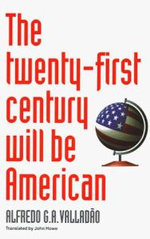 The Twenty-First Century Will Be American

Social forecasting International relations
Hold on while we process your request.