Women's Prize for Fiction
Be the first to write a review
Tweet
$29.99

The photograph of the woman is tied to a fencepost; the army chaplain hovers nearby.

Peter Faber, a German soldier on the Russian front, is pledging his life to the stranger in the picture, while thousands of miles away in Berlin, the stranger is pledging the same to a photograph of him. Having never met, Peter and Katharina are getting married, a contract of business rather than of love - he earns ten days respite from the war for his 'honeymoon' while she is promised a widow's pension if he dies.

Travelling to meet Katharina, Peter is surprised to find that he is attracted to his new wife; in only ten days the two strangers fall in love and commit themselves to a future together living under the bright promises of Nazism.

However, when Peter rejoins his unit in Russia, the bitter winter rapidly chills the heat of his politics. As his comrades begin to die - by the cold, by the thump of falling bombs and by Russian knives - he loses sight of why Berlin has sent so many young men to their deaths in the snow drifts outside Stalingrad. Meanwhile, goaded on by her desperate and self-delusional parents, Katherina is ruthlessly working her way up the Nazi Party hierarchy, wedding herself and her young husband to a regime that will bury them if it ever falls...

A stunning, riveting portrayal of ordinary people trapped by extraordinary circumstances, and the price they will have to pay for their survival. In the tradition of Bernard Schlink's The Reader and Rachel Seiffert's The Dark Room, The Undertaking shines an intense light on history and illuminates the lives of those caught up in one of its darkest chapters.

Be the first to review The Undertaking. 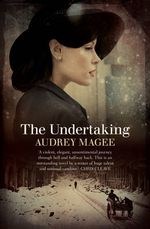 Contemporary fiction Fiction Women's Prize for Fiction
Hold on while we process your request.